We are excited to announce that one of the guest artists and speakers at the Hands-On Research Symposium 2019 (October 28th – November 3rd, 2019) will be Joana Sá (University of Aveiro / INET-md). 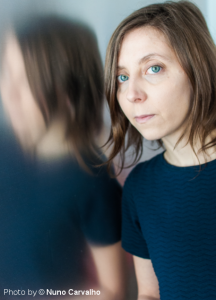 Pianist, composer, improviser and investigator. Her work stands out for its transversality, multi-dimensionality and its drive towards exploring disruptive and poetic thresholds of the music bodies. These features are at the core of the trilogy of solos Listening | the open, a major work begun in 2009 in collaboration with visual artist/cinematographer/film director Daniel Costa Neves. The trilogy is composed by through this looking glass (2010/11); In Praise of Disorder (2013); Listening: the open (2016/ ) and is the subject of her actual PHD research at Aveiro University (grant from FCT – Fundação para a C

iência e Tecnologia). She has studied in Lisbon, Paris, Castelo Branco and Cologne, among others with Paulo Álvares and Caio Pagano and had an INOV-ART Grant (PT) in 2009.

She is ½ of Almost a Song (duo with Luís José Martins, guitar & electronics), 1/3 of Powertrio (with Luís J. Martins and Eduardo Raon, harp & electronics), 1/5 of Turbamulta (quintet with Martins, Raon, Luís André Ferreira, cello & Nuno Aroso, percussion) and ½ of recent duo with Greek singer Savina Yannatou. She plays in various prestigious venues and festivals around the world and released CDs/DVD for labels as Clean feed, Blinker, Shhpuma and Centa. She also recorded for Deutschland Funk, SWR2 (Südwestrundfunk 2) and Antena 2.